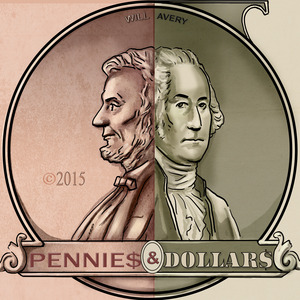 Will Avery is based out of Chantilly, VA. His latest project, "Pennies and Dollars", is a digital release of 29 original tracks - 7 of which are spoken word. If you get a penny for your thoughts, what do you get for your actions? Putting actions behind positive thoughts, chasing your dreams and being bold in adversity are some of the themes.

A horse or unicorn of a different color describes Will's approach to children music. He utilizes various genres and atypical musical arrangements to form a unifying concept for each project. Balancing lighthearted fun topics with reflecting true life experiences through his art, Will cheekily broaches topics ranging from rainbows, robots, chasing dreams, personal relationships and more.

Will first started writing songs for children while teaching English as a second language in Taiwan for 10 years. While working in Taiwan he published an intermediate book, "Rapping with English" and a series of books for pre-K, "Bobo and Friends", which included 100 original songs. Since moving back to the States, fatherhood has given new dimensions to his compositions.

Penny for your thoughts, Dollar for your actions!

Hi, let me introduce myself to you.
I am Will Avery. (Pause) I write music for the kids.
Some people say "He's silly." I say, "Gee, wiz
Gosh Golly. I'm awesome from the head to the toe.
The Super DBA over the rainbow
I got flows. Shootin’ gummy bears out my nose
You wanna take a picture? I pose..."

I hope you enjoyed Will’s introduction, which is 100% true. His latest project, “Pennies and Dollars” has the theme to invest in the future by putting thoughts into action (a penny for your thoughts, a dollar for your actions). Will dysfunctional relationships be rain on his parade or fuel on his fire? Will fears be blocks to his dreams or bricks in his road of life? The future has more questions than answers. There’s no single story. You don’t need permission to be amazing. Whether you succeed or fail, nothing beats a try.

Will shines a very unique perspective on children music. Jazz, rock, country, blues, funk, folk, rap, Americana and spoken word amuse, entertain and shock. “Pennies and Dollars”, will make you say “Oh Man” and think about children music differently. Will cheekily sings about his “Dysfunctional Family”, spins a tall tale about “Young McDonald” (before the farm) and shares true tales about personal experiences of being bullied, family life and more.

Literally, a bang for the buck, the “Pennies and Dollars” project consists of 29 tracks and can be digitally downloaded exclusively at CDBaby.com for only $.99
Release date: December 1, 2015